Looks in SCS games are used to define same model with different textures or material attributes. With this system you can easily extend your model to have several looks without exporting same geometry over and over again. Examples of typical look usage in SCS games are: gas stations, trailers, depot companies etc.

So each SCS Game Object inside Blender file has it's own definitions for looks. You can create, delete and edit look names in SCS Looks sub-panel under SCS Object panel when SCS Root Object is active or in SCS Looks panel in Material tab of Blender properties window when mesh object is active.

Most of SCS material settings can be "written through" which means that the current value of setting is written to all looks. This way you can for example easily change texture which you want to use in all looks without selecting each look and searching for the texture over and over again.

Write through can be accessed via More Options menu button ( 𐩒 ) accessible on the right side of attributes: 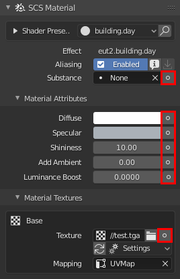 Write through menu has three options:

Note: When you don't define any looks in the model or you have defined only one, write through won't have any effect on material.