Through import one can import models and other elements which were previously exported to SCS intermediate-format data. 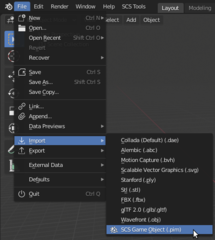 The import functionality can be found in Blender's import menu as SCS Game Object (.pim), which opens file browser dialog and enables user to import desired SCS Game Object. On the right side of the dialog one can set import options by his desire.

Note: Only animation files which belongs to an actual skeleton can be loaded. If they are not placed beside PIX files or any subdirectory, then you can still import animations later from Animation system#SCS Animations panel.