However before you use Conversion Helper you should download latest Conversion Tools for the game you want to create mod for and set path to conversion tools under Conversion Tools Path. Additionally make sure you have checked Intended workflow images, for better understanding how mod system works when using SCS Blender Tools and Conversion Tools. 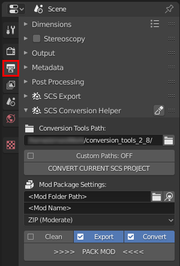 Small razor icon located on the right side of SCS Conversion Helper panel header represents Clean Converted Data operator. This operator will immediately clean content that you converted before or is left there from some other time. In general this makes sure your mod won't have any unused resources (leftover textures, old materials) in the converted result. Same action can also be achieved while using Mod Packing with enabled Clean option.

Custom Paths are holding list property for multiple custom paths that you want to convert at the same time. Use this custom paths if you want to merge resources from 2 or more different mods of yours. Example usage is shown in Intended workflow#Usual mod combined with dependency mod (using custom paths)

On the side of the list you can find operators for managing your custom paths:

While mod packing with Convert already triggers automatic conversion before packing, one can still execute manual conversion. Currently there are three different variations:

Usage of manual conversion is recommended when you want to pack your mod later or by hand.

This section is featuring properties and operators for packing a mod for SCS game.

Third row defines type of the compression you want to use for your mod package:

Next row features switches of automated actions that can be done before mod will be packed:

Final magic operator found at the bottom of the panel is >>>> PACK MOD <<<<. This operator firstly executes enabled automated actions and on the end packs conversion tools result into the ZIP package and copies it to the selected mod destination.

So if you don't want to bother with manual exporting/converting, then for easy usage follow this few steps: