Animations used in SCS games are driven by skeletons and keyframe animations (which are manipulating bones in the skeleton). There are two types of these animations:

Regardless of the SCS Animation type, creation pipeline within Blender Tools is the same for both above types. To create SCS Animation you will have to use standard Blender procedure of armature creation, vertices skinning and bones animating.

Note: Only location, rotation and scale manipulation of bones will be exported during SCS Animation export, anything else will be ignored even if it will be animated and played inside Blender.

After you successfully animate bones with Blender action you will have to set up SCS Animation in SCS Animations panel. Once setup is done you can export your SCS Game Object as you did before and animations will be exported with it.

Note: Remember that for export of animated model you have to enable Animated Model in SCS Root Object properties, switch can be found in the locators panel Root objects.

To export created Blender action into the game you will have to define SCS Animations with usage of SCS Animations panel which you can find inside Blender Properties window in object tab under SCS Object Specials. The panel will appear only if the currently selected object is armature. 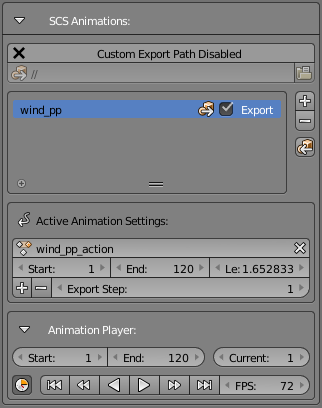 Note: When seeing "No 'SCS Root Object'!" message instead of animations list make sure to parent armature object to SCS Root Object.

Custom export path should be used to store your animation files somewhere else than the rest of the files when exporting SCS Game Object.

This path may be useful when you are creating sequence of animations for walkers, as all of your walkers can use the same skeleton and animations and thus you may export them in different directory.

If custom path remains disabled, all of the SCS Animations will be exported beside the rest of the files.

buttons on the side of the animations list. Furthermore, animations can be imported with

button, which will place you into the file browser to select SCS Animation for importing.

This panel area is place where you link Blender action (animation) and set various properties to currently selected SCS Animation in list.

To preview currently selected SCS Animation you can use Animation Player, which is nothing more than wrapped interface from multiple Blender editors for already existing settings.

There is also additional panel for setting custom skeleton file path inside SCS Project Base Path and name of skeleton file (PIS) which will be created in the case of exporting animated SCS Game Object.

This custom path and name come handy again in the case of creating sequence of animations for walkers, as all of your walkers can use the same skeleton and thus you may export skeleton in different directory.

If both paths remain empty, skeleton file (PIS) will be saved beside other exported files and will use SCS Root Object name as the name of the file.