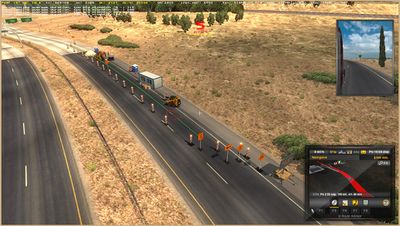 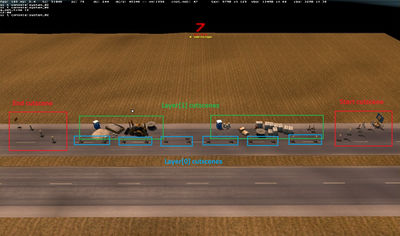 Composition of the road event

Road events (RE) are dynamically generated situations on roads present in ETS2 and ATS.

RE are defined from several cutscenes placed along the road. RE distinguishes 3 types of cutscenes:

According to the length of the RE and the lengths of cutscenes, the space between start and end cutscenes is filled with layer cutscenes.

For working road event we need:

Basic element that is used on the RE is cutscene. Cutscene is exported map that can be dynamically inserted into the game.

Cutscenes are exported from the editor as standard map SBD files. However for RE, each exported cutscene has to have camera_point_item with tag cutscene. This point serves as cutscene origin (position and rotation) when placing cutscene on the RE.

Note: From example it is seen, that camera point is put on navigation line, which is on purpose, as RE cutscenes are placed along navigation lines. This way one can nicely setup cutscene on the road without guessing how it will be placed later on.

All of the cutscenes are defined in "/def/camera/cutscene.sii" and are used for different purposes.

For RE one has to define cutscene like this:

Where objects_path attribute points to exported cutscene and last token in unit name donates "cutscene token". Cutscene token (in example: "acc_stop_lii") is the name that is later used for gathering of cutscenes in journey event cutscenes trough cutscene_tokens attribute: Documentation/Engine/Units/journey_events_cutscene.

These cutscenes are then linked to RE via their unit names.

In case of RE, cutscene definition of type journey_events_cutscene also uses left_width and right_width attributes, which defines the length of the cutscene. This two attributes are very important as they determinate how much space is between different cutscenes, how many layer cutscenes can be places in whole RE and where traffic blocks will be placed.

To determinate left and right width one has to:

All RE are stored in "/def/world/journey_road_event.sii" as list of journey_events_road_event units.

The total length of RE is defined as:

Depending on defined max/min_length there can be three situations by spawning of the RE:

Note: In case of very short road segment it is possible that no layer cutscene will fit into the middle, so one can use min_length to prevent this.

Note: In case that traffic_block is set to true then there must be 35m of uninterrupted roads in front and the back of RE, otherwise event will not spawn.

As roads are usually not straight it's essential that RE can be spawned on curved roads also. This is driven by layer_min_curve and layer_max_curve attributes which have to be defined for all layer cutscenes (number of elements in this arrays has to be the same). These numbers determine the minimal and maximal allowed curvature between each adjacent cutscene within one layer.

Example above shows layer consisting of two barrier cutscenes and direction vector of their placements (blue arrows). Curvature is then computed as angle between these vectors, from which we can get minimal and maximal curve angle.

As RE can change flow of the traffic and even block lanes, we have to have support for warning signage which is placed before and after event. Warning signs are defined with: 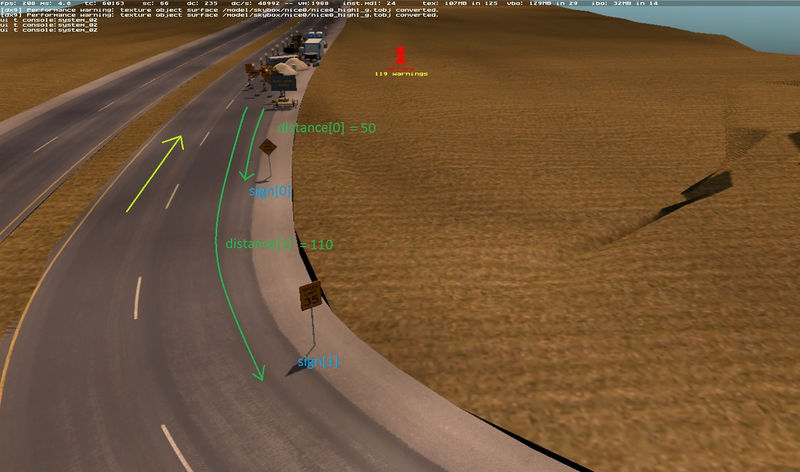